Successor to the widely publicised I400, the I410 is already announced as an industrial weighing must-have. Software and ergonomic developments Even more than a simple weight indicator, the I410 is a true Intelligent Terminal integrating various trade applications and capable of responding to many needs while remaining accessible and intuitive. 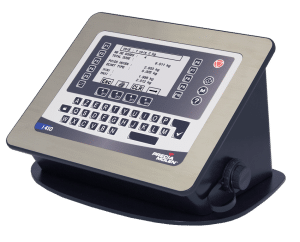 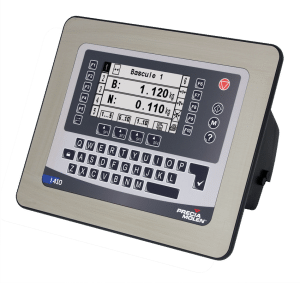 The I410 offers an  improved user interface, including a more readable display, and an alphanumeric keyboard. The introduction of two new character fonts (Farsi and Cyrillic) will also allow a larger number of operators to work in their mother tongue. The I410 indicator now relies on a faster and more powerful 32-bit processor, and therefore more effective when it is requested within the framework of complex processes – such as metering and dynamic weighing. Designed to integrate with any industrial process The role of the I410 indicator is to ensure the conduct of the weighing application, involving management, monitoring and control of the various transmitters and peripherals connected to it. The I410 indicator, the same as its predecessor, is thought to be as universal as possible: it allows communication with the main field buses on the market (Profibus, DeviceNet, Ethernet Modbus-TCP and Ethernet/IP), and integrates with any industrial process: weighing of silo, dosing by batch, packaging (gate filling, bagging), flow control in loading or unloading, check weigher, dynamic weighing and metering, weighing device circuit.

The I410 is based on the same fundamentals which have already made the I400 range successful: a modular architecture, and high level metrological performance.

This site uses functional cookies and external scripts to improve your experience.

NOTE: These settings will only apply to the browser and device you are currently using.

These cookies allow us to establish anonymous statistics of visits to the site (the number of pages viewed, their frequency of return, the number of visits, etc.) and to optimize its ergonomics, navigation and content.
By activating these cookies, you allow us to monitor and improve the quality of our services.

These cookies guarantee the proper functioning of the Precia Molen website and allow its optimization.
Website features or services may not function properly without these cookies.
They make it possible and guarantee the important functionalities of the site (to memorize your clickstream data , to define your preferences of connection, to fill a contact form, etc.).
These settings apply only to the browser your are currently using.